Christopher Gray became our Music Director in 2008. He is an inspirational person who has contributed much to developing our vision for ambitious, innovative programming. His lively rehearsal style continuously hones the choir's standard of performance; he encourages us to work hard on the challenges of new and unfamiliar music, and to take fresh approaches to the more familiar works. 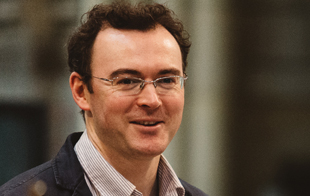 He is Director of Music at Truro Cathedral where he is responsible for the Cathedral Choir and its six sung services each week. He also directs Cornwall Youth Choir and has previously conducted St Mary's Singers and Orchestra, Cornwall Junior Choir, Richard Lander School's Wilbye Choir and Truro School's Senior Choir.

Appointed Assistant Director of Music at the Cathedral in September 2000, he worked closely with Andrew Nethsingha and then Robert Sharpe. During this time, he appeared as organist with the Cathedral Choir in numerous live broadcasts for BBC radio and television as well as on eight CD recordings on the Regent, Lammas and Priory labels.

After his early musical education in his hometown of Bangor, Northern Ireland, Christopher became Assistant Organist at St George's Parish Church, Belfast. At the age of 18 he moved to England to take up the organ scholarship at Pembroke College, Cambridge, where he read music. A Fellow of the Royal College of Organists, he studied the organ with David Sanger and Nicolas Kynaston at Cambridge. He was subsequently taught by Margaret Phillips at the Royal College of Music, where he was a post-graduate student and a prize-winner. During this time he also held the organ scholarship at Guildford Cathedral, working with Stephen Farr and Geoffrey Morgan.

Under Christopher's direction, Truro Cathedral Choir's recent CD recordings have attracted praise from critics in the international classical press: “Inspirational singing from one of the top cathedral choirs in the land” (Organists' Review); “The singing of the choir, set in the wonderful acoustic of Truro Cathedral, is beyond praise” (MusicWeb International); “They have a fresh, unforced sound and encompass with ease the bigger eight-part writing and unexpected harmonic progressions. It's noticeable that the solo voices include five different boy choristers of equal accomplishment – a tribute to Gray's expert training.” (Gramophone). Following on from single-composer discs of music by Benjamin Britten and Philip Stopford, the latest CD features music composed for Christopher Gray and Truro Cathedral Choir in the past three years by composers including Paul Drayton, Graham Fitkin, James MacMillan, Russell Pascoe and Julian Philips.

Support us
"I loved rehearsing and performing Rachmaninov's 3rd piano concerto with the Three Spires Orchestra; they are a fantastic orchestra and fully deserved the standing ovation. Chris Gray was a breath of fresh air to work with - he cares so much about the music and about giving the best performance possible. I listened to the Three Spires Singers perform Elgar's 'The Musicmakers' after the interval and was moved to tears. A very memorable concert."
Cordelia Williams
Menu